Bullying is a widespread and a serious issue globally. Our school wanted to address this issue and wanted to do something to promote anti-bullying. This topic was going to be catered to in Life classes and so on of our teachers had approached the students of grade 11 about making or doing something for promoting anti-bullying. I came up with the idea of creating some graffiti which pass on a positive message around the school. However, few of my friends and I came up with a graffiti. Everybody used their skills and time to complete a huge project. We hope we have helped our community solve an issue.

L1 – Identify own strengths and develop areas for growth

As the butterfly wings were very big in height we needed people who are tall and have the skills of painting. As one of my friend and I were tall, so we took this task of painting all the things which were situated very high. However, we were not so amazing in painting but we had basic skills so we thought that we can enhance our skills and paint better. We learned some new skills which helped us paint better and beautifully. It was very necessary to identify my strengths and weaknesses as I may have destroyed the graffiti if I didn’t identify my weaknesses.

L2 – Demonstrate that challenges have been undertaken developing new skills

This was going to take a lot of time and so we had already planned what we were going to do and how were we going to execute it. Time was a challenge here as we did not have a lot of time to complete this thing and so we had to manage our time better. Gradually we learned how to manage time and we used to take 5 mins break after every 1 hour of painting we completed. This helped us in not only completing it on time but also develop many skills. This was a huge graffiti to be painted and I knew I was weak in painting and drawing however I took this challenge up so as to I learn how to paint on a large scale and further in my life I could use these skills. I was making a lot of errors in the start but after some guidance from my fellow friends with better skills I was able to minimize my errors.

I was a little more keen in helping eradicate bullying and I used this opportunity provided by school teachers to the fullest. I had done some pre-research when we were told to get ideas for anti-bullying campaign. After the idea got selected, the whole team used to come early morning to finalize the graffiti designs and quotes that were included in the graffiti. The graffiti had six quotes which were specially written there to help the victims overcome bullying. The quotes and the color chosen were spreading positivity around and whenever a victim or a person is not feeling well, can come and get themselves clicked or work in that environment to lift up their mood. We made 2 graffiti, one was a gigantic pair of butterfly wings and another was a pair of flexing biceps. Both signified power and freedom. These 2 graffiti were inspired by Kelsey Montague.

We worked in a group throughout this activity and we developed communication skills. As we had around 8 group members we had a higher number of ideas and perspectives to decide from. This gave us a wide range of ideas from everybody and after all the inputs of all the group members we came up with a great idea of a gigantic pair of butterfly and a pair of flexing biceps. This was a mammoth task taken by us and we needed collaboration between everybody so as to maintain the level of painting and also to work effectively without anybody wasting their time.

We took almost a month to paint this graffiti. Each one of us had each others back so if one is painting on the top right corner so the one beneath him/her keeps an eye on the chair if it is stable and that’s how we increased our speed. We learned many new skills during this experience.

Bullying is a significant issue globally. There are millions and billions of people around the world who suffer bullying and many give away their lives to protect themselves from bullying. Our main motto behind making this graffiti was to create a space for the victims which could help them feel better. The students now have understood the things happen because of bullying and these students are going to be the future and they will migrate to different universities and schools. They then will spread their knowledge which will slowly and gradually help decrease bullying. We have ignited a fire which will keep on going so we know how this fire will solve a global issue. 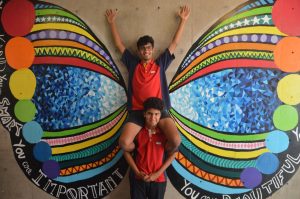 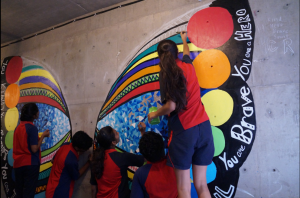