Fountainhead Model United Nations was organised on 25th and 26th November this year in our school. Model United Nations is an academic simulation of the United Nations where students play the role of delegates from different countries and attempt to solve real-world issues with the policies and perspectives of their assigned country. Students from various schools and cities participated in the debate.

We were responsible for making the event successful and during the event, I accomplished several goals:

L1: Identifying my own strengths and develop areas for growth

Throughout the process, I got to identify my new strength which is to delegate work to others. I had to assign work to other members like instructing them about how to make the delegate kit and what all to include, also telling them about the deadlines and making sure the work was finished by that time was a big task. Due to my previous CAS experiences, I could overcome one of my weaknesses which was working in a team. In this process I was able to eliminate my weakness and was comfortable working with a team, this helped us to make decisions more quickly without any conflicts.

L2:  Demonstrate that challenges have been undertaken, developing new skills in the process

One of biggest challenges we faced was on the day of the event when we were decorating the venue for socials. We had to design a Photo Booth and earlier we had ordered fairy lights for that but at the end moment, they stopped working. So being the heads, one of us quickly went to buy new ones and till then rest of started making the other one without using the lights. We successfully managed to decorate the photo booth, not only one but we came up with two of them. This task required a lot of spontaneity and creativity which helped me to develop these skills. I was really happy with the outcome and team effort.

L4: Show commitment to and perseverance in CAS experiences

This event required a lot of people’s effort behind it. To make it successful, we had to show a lot of commitment like coming early to school and giving a lot of time and efforts. As being one of the organising committee head, I had to ensure that all the work is done within the deadline and had to report it to the higher authority. In our free slots, we ordered resources so that in morning we could start with our work. On the day of the event, we had to run here and there and solve all the problems of the delegates so that they don’t feel uncomfortable. Also at the end moment, we were required to be in logistics for some time and we did that also. It was a very tiring task, however, due to my commitment from the start, I had to do all possible things required.

As a team, we were very happy with the final outcome of our days and days of efforts. Our hard work was paid off when we got amazing feedbacks from delegates as well as teachers. It was a large team that I had to manage so at times it was difficult to work together because some people had contrasting perspectives on some points but as a majority, we used to explain the person and reach to a consensus which was in favour of all. It was very important to work together as a team to make this event a hit because it required a lot of ideas, creativity and hard work which wouldn’t have been possible without a team. Collaboratively we had to do each task with patience and determination to reach our goal. After the task was over I understood that each and every person’s contribution was so important.

Overall, this was a good learning experience and I got a chance to work with an amazing team. I was really happy to see FSMUN cross more than 90 delegates, which is highest till date in our school. These things make all the efforts paid off. I hope the skills I have developed or used will further help me to excel. 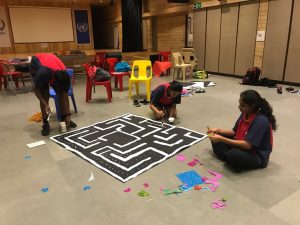 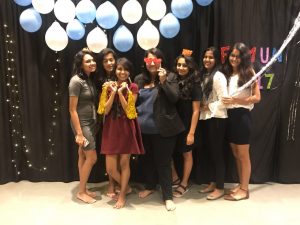