People have a natural flair for something or the other. For me, it has always been oratory skills and speaking on stages without fear. From last 4 years, I have been a part of this wonderful initiative by Mr. Dheeraj where we as students from different schools across Surat district get a platform to speak on and discuss our ideas. This year too, I participated in Young Orators competition and my friend and I represented Fountainhead school there.

LO 1: Identify own strengths and develop areas for growth:

Identifying your strengths from an early age is important so that you can excel in those areas and make a better use of your strengths than other people for whom this is their weakness. I identified my strength from grade 7 when I first went to Young Orators. Soon public speaking became a habit and I felt much more confident. Thus continuing oratory competitions like this I excelled my strength. Simultaneously, identifying weakness is also important after going to this competition thrice I realized that I lacked a spontaneous personality and had to have a much faster-thinking process wherein within minutes I could build on a good speech.

It was very important for a person living in this interdisciplinary world to make my thinking abilities to be faster and more productive. Hence to work on this weakness of mine, I started attending workshops of Young orators and started taking notes of the important points which could make my processing of ideas much faster. Today after attending several sessions and workshops to make my thinking more productive and efficient, I find having an upper hand during class discussions, debates, (Hindi IOA) and other important oral activities.

To excel in any skill or to have an upper hand in anything, it is mandatory for you to show perseverance and commitment to your work and field of excellence. We had two rounds of Young orators and had to make a speech of 500-600 words in the first round with midterm exams approaching. I did find it difficult to firstly write 500-600 word long speech and secondly to even memorize it. But the commitment was surely important. I knew my seniors who had still gone for the competition even when their board exams were approaching.

I divided my work and time according to the requirements. I started waking up a bit early and wrote my speech, and the perk of waking early was that my mind was fresh hence the thoughts came while writing the speech were really good and I felt fresh as soon as my task of writing 300 words each day was accomplished. Hence, the routine was not disturbed. I just added 1.5 hours to my routine to finish off the young orator’s speech.

I feel doing works simultaneously like this allows you to explore a new side of yourself and also makes you more of a person rather than just a student. Hence, even in future I surely would indulge myself in such public activities where you learn what the book doesn’t teach you.

Public speaking is getting more and more important with westernization and corporate culture taking over India. Hence, I feel the need in everybody to have a good command over their language so that not only their ideas but even their feelings are understood by the other person. 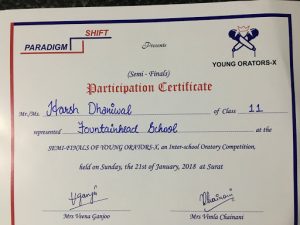