Cultural artifacts are a way of communicating about the long lost culture of a country. Language is an important factor to be included in the representation of a culture. Language is also used as a way of preserving ancient culture.

As being a project participant I was given the choice of a few countries, and I decided to choose Papua New Guinea as it has a lot of ancient culture which people don’t know about. The structure and content of a text changes by referring to the Face Mask Artifacts which were once used as an identity, but now is just for representational purposes.

Managing a smooth communication between my group and the project leaders. Understanding the culture of my country in more depth by interviewing people of that country.

LO1:  Identify own strengths and develop areas for growth

I am very good at working collaboratively in a team, hence the role of a project leader was appropriate for me. I was able to communicate properly with the other participants. I am also good at making PPTs which helped my group in many different points through presentations. However it would be much better if as a group we decided on the tasks, themes and deadlines more early on.

LO2: Demonstrate that challenges have been undertaken, developing new skills in the process

We had to face many difficulties throughout the span of the project. Some of them include, procrastination from the participants’ side. The 2 projects leaders had to remind us repeatedly and eventually as a group we developed on our skill of coordination and communication. We also had to tackle last minute preparations and mend errors that emerged through. Because we had the balcony, we had limited space for decorations hence we faced difficulties during the final part of project. However, we were able to tackle them and present our works creatively therefore, developing management skills.

LO3: Demonstrate how to initiate and plan a CAS experience

LO4: Show commitment to and perseverance in CAS experiences

At the start of the project I did not show much dedication and effort as I did not relate to the project context and did not think it as an important task. However as I got to know the project and relate it to what my country(India) is experiencing, I started taking more and more interest. Teachers also gave me along with few students a 3-star green flag as this was the first time they had seen me taking initiative and being proactive.

Creating and designing PPTs has always been my strong suit, therefore as a good group member I decided to help my fellow teammates, for example, one of my group member didn’t know how to insert a YouTube video in their presentation, therefore I helped him to do that. Working in a group was not a very strong suit of mine but with the help of my project assistants and fellow group members we were also able to achieve that. We divided the tasks within each other to complete them on time and divide the load equally amongst everyone so that we could get active participation from everyone. Hence, we all were able to work collaboratively to make this a fun event.

LO7: Recognize and consider the ethics of choices and actions

As this was a Culture led event, we had to consider and keep in mind the language we use as sometimes it could be very offensive to some people. We also had to take care in the authentic and sensitive representation of our culture. A teacher in the school was from the similar and country and had the same culture as my country, he asked me about what language is used in the country and as there we used multiple language used I was unable to answer that. 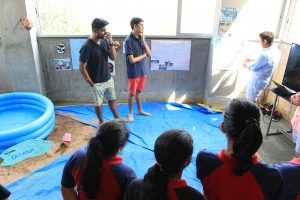 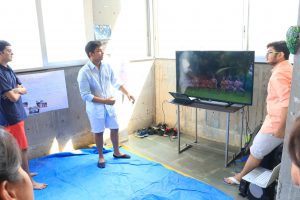