Gavier Lake is a place in Surat which is taken care of by a local NGO called Nature Club Surat. It is the only place in Surat, where migratory birds from different regions of the world assemble. Gavier Lake is considered to be one of its kind as it is one of the few places in South Gujarat where different species of migratory birds assemble. Each year the lake gets covered by unwanted seaweed algae, which disrupts the surroundings as birds are dependent on fishes in the lake for food and the seaweed blocks their vision and sometimes entangles them in it causing them to die. We decided to take up an initiative and help the ecosystem by clearing the unwanted vegetation from the lake.

LO2: Some of the members in the group had some misconceptions and argued that by touching the seaweed, we might get allergies and get ill. To show them that the seaweed isn’t harmful to bodies we picked the vegetation in our own hands and showed them that there is nothing to be afraid of and we even made them talk with the person in charge and he explained that it is completely harmless. Another challenge that we faced was that the wooden boat we were given to collect the unwanted vegetation was filling up with water and started to drown slowly, we came up with a solution and after filling up the boat to some extent we came back to the shore and removed all the vegetation and threw the water out with buckets. We learnt this by experience and it took us a couple of days to efficiently collect the seaweed and we improved our skills with experience.

LO4: We had to work during weekends, and that too early in the morning as the heat would be unbearable in the middle of the day. We had to give up on our sleeps that and work early in the mornings but our commitment to help the habitat of the birds better got us past the willingness to get up early and our commitment towards the environment helped the birds and helped to continue the food cycle in that particular habitat.

LO5: This task required a lot of labor work and getting our hands dirty, this task wouldn’t be possible if done alone. We required a lot of cooperation and teamwork to successfully accomplish the task. At the start we struggled to cooperate and hence mentioned above, we made a plan which helped us bring things back on track and make the whole process a lot smoother. While the people went on their boats, our job at the shore was to guide the two boats of where to collect and to come back to empty their boats. And when we were on the boats, we would have to synchronously row the boat in order to make it move in the right direction. Working in a team was definitely an advantage and we were able to complete the task lot quicker and efficiently.

LO6: Birds around the globe are suffering from from this issue, by conducting this activity we tried to help a region whose rate migratory birds was decreasing due to this issue, by helping birds like kingfishers and cormorants who dive inside the lake to prey on fishes, so by clearing the seaweed from the surface of the lake we helped continue the foodcycle of nature as when the birds do not have anything to eat, they eventually die of hunger. If the seaweed would not have been cleared, it would have caused the number of migratory birds arriving at Gavier Lake to decrease year by year.

This was a task that required a lot of hardwork and perseverance but the end result turned out to be fantastic and overall it was a fun and enlightening experience for the whole group. 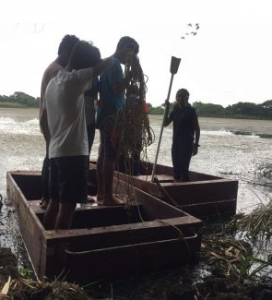