This was a very challenging task, as it was a vertical climb of 15000 feet, and we had to trek on melted snow, with lower levels of oxygen and pressure. Me and my three friends went on a trek on a mountain range situated in the northern region of India and is home to one of the largest mountains in India.

LO1 – Identify own strengths and develop areas for growth

Trekking was one of my strengths and I had been trekking various times in different regions of India but this trek was quite different from the rest of the treks and was the highest trek so far for me. I had never been trekking in the northern part of India and it was much colder, windier and steeper than usual treks. During the starting of the trek I found it just like any other trek and during the middle of the first day of the trek, I was extremely tired and one strength I developed during climbing the Pangarchulla Peak was that I increased my stamina and strength as I had to use all of it to climb to the top and I was gradually adapted to the harsh climate and hence I found various techniques to save my energy like drinking water constantly to stay hydrated and eating everything that has been provided by the guides.

LO2 – Demonstrate that challenges have been undertaken developing new skills

My fear of heights has always pulled me away from performing activities like skydiving and bungee jumping and that really affected my confidence and morale during the downhill period after the climb. I managed to not look down at every single one of my trek, but that did not work out here as the paths were too narrow to not look down and I was literally terrified while going downhill and constantly slipping and slowing the group down. But by the help of my friends and the guides, I somehow managed to go downhill and I led our trekking team downhill as a result, my confidence in going downhill boosted and I think now I can trek without any fear of falling down.

LO4 – Commitment to and perseverance

Me and my friends planned this trip in order to try something which we would not to do regularly and hence we all were very excited and committed in successfully climbing and waving the Indian flag on the Pangarchulla Peak. Due to our commitment to succeed in this task, we were able to make it to the top. We got tired, we slipped and we fell into the ice but we were perseverant to climb to the peak of the mountain. I had to commit myself or else the pain and the tiredness would take over my mind and it would stop me from climbing.

Teamwork was necessary to climb to the top as we had to perform various tasks like helping other members with supplies, tying their rope during the steep regions and preparing them mentally for the difficult patches in the climb. As we were the youngest members of the trek team and hence we stayed ahead of the whole group and lead them to the top. We helped each other and even the people whom we did not know, the guides helped us to provide medical attention to the people who got hurt and we helped them by doing small things like fetching them water and applying bandages. Without the support from everyone on the trek team, we would not have been able to cover the peak of the mountain.

LO7 – -Recognize and consider the ethics of choices and actions

We were told before the trek to respect the environment and our surroundings as we were going inside a pollution free zone and so the adults were told to not carry any cigarettes with them and a common instruction for all of the trek team members to not litter plastic anywhere for the duration of the trek and being school students we understood the obvious reason for it. The birds and animals found in the mountains can consume the plastic considering it as their food and then later choke to death, and we were given a preview of how our decisions can impact the life on another living human being. Hence we thought that it is morally and ethically correct to not litter around and we made sure that all the team members threw their waste or garbage in a proper manner and none of it was left lying around. 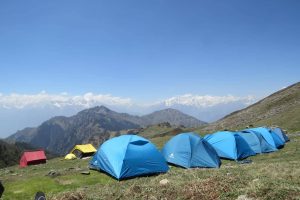