Cleaning the beach was an initiative taken by our school. The initiative was taken in order to be global citizens and help the government in the programme ‘Swachh bharat mission’ . We went to a beach near pur school since that was not very known by people and still was very dirty. The beach had plastic cans , wrappers and glass bottles lying all around.

L1.Identify own strengths and develop areas for growth – When we were asked to clean beach the reactions we gave was not very pleasant since we never really thought of doing such a job earlier. As soon as we started doing the activity I realised a few things such as : The activity gave me satisfaction and made me feel like i am a responsible citizen, the activity made my communication skills better and also encouraged me to continue doing such activities in future.

L2. Demonstrate that challenges have been undertaken, developing new skills- During this activity I developed my communication skills and also team working skills as we worked in groups of three . Working in groups made our work efficient and quicker.The most difficult challenge was first to convince my own self to work properly and give in the best and then to convince my team mates to work properly in order to clean the beach. A few other challenges were picking heavy bottles and then segregating the garbage on the basis of renewable and non renewable.

L4. Show perseverance and commitment in CAS experience- After I was convinced about doing the activity I had put in great amount of effort to give my best and we constantly collected garbage for about 30 mins and by the end we filled about 3 garbage bags , this shows that I was committed to the activity.

L5. Demonstrate skills and benefits of working collaboratively- Working in a group of 3 made the work very quick. One of us used to hold the garbage bag and the two used to pick bottles/cans. Since there were three of us we could even divided the garbage bags (one with renewable things and another with non renewable things). Due to us being 3 we were able to fill three bags of garbage in the time given to us.

L6. Engagement with issues of global significance-The activity was completely based on social issue. what we did helped the society. It was one of the ways in which we could help the programme ‘swachh bharat mission’ . The motive of the programme is to move towards cleaner India and we did help by cleaning the beach.It has been a long time since people have been seeing and learning the fact that we should not be throwing garbage without dustbins. After the activity I realised that how important it is to throw garbage in dustbins, throwing garbage anywhere/everywhere is easy but picking it up and cleaning places is a very difficult task and we will not be able to move towards a cleaner country if we don’t understand this.This activity also led towards a positive change in me as I do not litter on roads anymore.

L7. Recognize and consider the ethics of choices and actions- Since the initiative was taken by school and they asked us to clean the beach, I had a choice of not cleaning it and instead have fun and just roam around but I considered cleaning the beach since that was more ethical for me. I would get more chances to have fun with friends but I might not have another chance to do such an activity.To do this activity I even made some of my friends recognise the importance of being a global citizen. 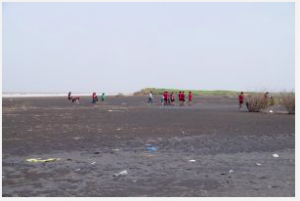 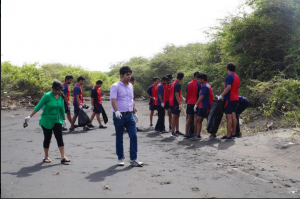