P.S.(Personnel sport) classes are where one has to select one single sport that they will play during that class, 3 times a week for 50 mins, for the entire academic year. Since grade 5, my preference for the P.S. class has been football and it was no different this year. Football has been my favorite sport ever since I learned about it when I joined this school, from the layman’s eye the game is simplistic and straightforward, howbeit, once you geek out and start watching and understanding professional football you get to understand how much knowledge and understanding you need to play this game on a good level. Ever since grade 5, I have learned so much about the game, however, it feels like I still have double of that to learn.

LO1: Identify own strengths and develop areas for growth

Football consists of 11 players each having different roles to execute. Usually, there are 4 who defend the ball, 2-3 who attack and try to score and 3-4 in the midfield who try to help out the defense and the offense. Be that as it may, there is 1 more role, the goalkeeper, the only person on the team that can touch the football with their hands in a certain proximity.  I was quick to develop reflexes and learn the decision making required for the role, which was one of my biggest strength. However, this year I was out of fitness as I had been playing considerably less because I just had my GCSE’s last year and I was lacking fitness. Additionally, considering I was a goalkeeper, my physique and upper body strength was something that I had to work on. Being skinny helped me with being agile however as I lost fitness, my agility corresponded. Therefore, my main goal was to train off the ball as much as possible and get my fitness back to optimal levels and do more weight training.

LO2:- Demonstrate that challenges have been undertaken, developing new skills.

At first, I really liked my role and I even played very well in this role. I was the number 1 in the school’s main team and I even made it to the district team consecutively. However, after I had a break from football, I had a loss of interest and motivation towards the game. To achieve anything or to get better, my biggest obstacle was to get my motivation back. Overcoming this was a tedious task but it had a simple solution. I had stopped watching football and when the champions league got started again for the 2017/18 season, I started watching football again which in return reinvigorated my passion for playing football and my motivation to get better at it.

L04:- Show commitment to and perseverance in CAS experiences.

After I completed my GCSE’s, I thought it’d be smooth sailings (in terms of academic pressures)  for some time but then I realized the vigor of the diploma program is worse than anything I’ve ever known. I slacked off in some classes and had to miss some of my P.S. classes to cover up, additionally, we also had to miss some P.S. classes to plan/prepare for our CAS/EE/TOK work. Moreover, in grade 10 and before, we(our school’s football team) also attended early morning camps which would help us a lot at improving in the game. However, this was not possible anymore as the team members often had early classes for extra academics (math HL, remedial classes, consultations for TOK/EE, etc) so nobody could coordinate and attend the camps anymore. This meant that I had to practice on our own at home, alone, so that my skill levels don’t drop. Furthermore, I also changed my gym exercises so that it would benefit my fitness in football and help me be better at it. Showing perseverance by changing up my personal day to day schedule so that it benefits my football helped me stay at my level and improve to some extent which is one of the reasons why I got selected for the district team again, despite being considerably out of practice on the field. 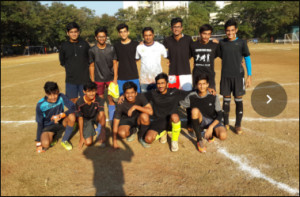 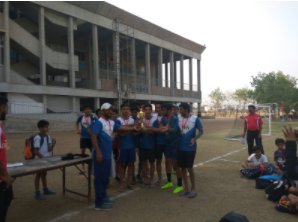