This activity was arranged by our school Fountainhead for underprivileged children. It was brought up by the school in order to promote caring nature in students and be internationally minded for a better tomorrow. I took this opportunity and platform to make the destitute children learn football as a sport. In a time span of one month, and 6 sessions with those children, I made them learn the basic skills of football, right from how to pass a ball to your partner and shoot to goal (accuracy).

Learning that I met were :

Learning outcome 3: “Demonstrate how to initiate and plan a CAS experience”
This activity was arranged by fountainhead school, I volunteered in it by teaching them new sport. Me with my group had planned that what will we teach them and had made small groups and started with the activity. After a session we had divided them according to their age. We later taught them with basic skills like passing, shooting and control the ball.
After few sessions we had made them play match and few other drills like defence vs. attack. And they really played well and we were happy with that.

Learning Outcome 4: “Show commitment to and preservance in CAS experiences.”
It was very difficult to commit ourselves for these sessions. I had service sessions on weekends so waking up early was difficult and I also had mid-term exam and giving sometime during the time of exam was a bit difficult. Other thing was that we had weekend to teach them so the things learned on these days the children would forget that till the next weekend. And few students had attendance problem as they  come on these weekend and would be absent in other session.

Learning Outcome 5: Demonstrate the skills and recognize the benefits of working collboratively.

The work that we did would have been impossible without the support from all my friends, teachers and staff. there were many students from government schools so we as a team divided them according to what they play and their age. My role was to teach them skills like passing then shooting and make them learn basic skills. After the session I was very happy helping someone and making them smile. 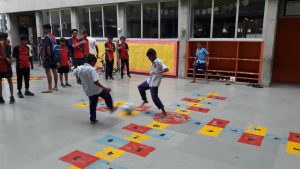 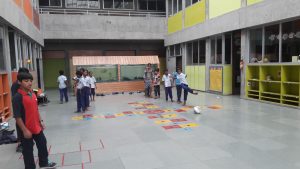 One thought on “Service Session (Football)”