Our school offered us an opportunity to conduct service sessions. The idea behind conducting service sessions was to provide underprivileged kids a platform where they can learn anything that interests them.The activities that our school offered ranged from various forms of art like painting or dance to any physical sport like basketball or volleyball. As we were the senior most batch eligible for participating in the service sessions we were asked to volunteer as the incharge for different activities. I volunteered as a incharge for the crafts team. Though I did not have any art background I thought being a part of craft’s team would a good idea with the aim of developing new skills and using my own creative skills. Being the incharge I had to plan the agenda for every session and order materials according to activity planned.

As the incharge I had to stay committed to the cas. Before finalizing any activity I had to watch several videos on how to make a particular craft work and try it once at home to ensure that it was properly made in the allocated time.Once the activity was finalized I had to make sure that all my team members were aware of the activity planned and were satisfied with the same. On the day of sessions, I made sure that all my teammates were working efficiently on the tasks assigned to them. As these kids could not afford fancy stationery we made sure that the craft work that the kids made could be made with basic materials like a popsicle stick so that they can try such craft work at home. Also, the things which they made could actually be used later on such as a pencil stand, lantern etc.

Seeing online videos, following instructions and creating a craft work is relatively easier than teaching the entire process to kids who lack a base in arts.When it comes to teaching I am completely naive so this was a challenge for me. As a few sessions went by I became more patient. The challenges did not end here, there was a communication gap with the students because of the language barrier, ensuring that these kids were understanding the instructions given by us became difficult so we stepped out of our comfort zone and tried to conversate with them in their regional language.  In Order to maintain the kids interest in the craft workshops, it was essential for us to motivate and encourage them.

Being in a group was a big advantage as we could divide the team members into different groups so that they give personal attention to the kids. There were sessions when a lot of kids wished to learn arts so forming different groups made the supervision easy and the coordination better. As the crafts team had students from different grades I was able to build cordial relations with them. 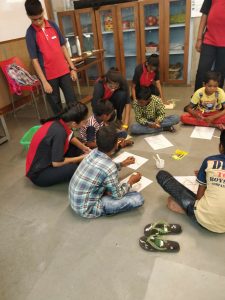 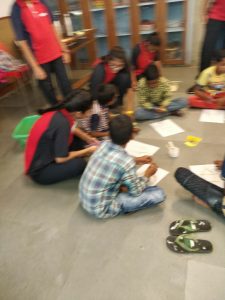 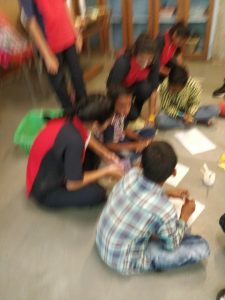