Culture day is where the countries of different contents are displayed and they have their famous things and some research is involved. The countries should display their cultures, traditions, traditional clothing, traditional cuisine and if there are some bands or cartoons that originate from the particular country.
1.  I learned these things about the Language used with reference to the culture of the country that I explored.

French has a powerful impact the language itself is spoken in many countries and the reference of Monaco, it is heavily influenced by France and French is gaining attraction from everywhere around the world and its significance on my activity was shown in the F1 grand prix and the hotels which are also named in French.

I learned how can a person persuade the audience with different text types. The country that I chose was Monaco and I explained the information through a 3D model, brochures for advertising historical hotels, the Posters for F1 race Grand Prix and also presented other text types.

Demonstrate an awareness of how language and meaning are shaped by culture and context.  The vocabulary or the jargons related to Monaco were in French their traditional cuisine was also in French. Monaco is highly influenced by France and so has the same language, same currency which is euro and defense are also provided by France. Monaco is the playground for the rich and has a boost in tourism and immigrants because of its tax laws. The grand casino attracts tourists which help in country’s growth. The above learning outcomes are achieved through the study of texts in relation to some of the suggested topics.

Languages and the individual – Monaco – Organisation Internationale de la Francophonie which comes under the French language countries. Other than french there is a native language Monegasque which is also spoken by the locals. There is an extensive cuisine in Monaco with some influence and essence of  French cuisine.

The tasks that I performed well as the 3D model that I made which gained the attention of the visitors as it popped out to four 3D quadrants and had information written on it so that the audience can read. Apart from the model my presentation of the traditions, culinary delights, clothing etc which was orally presented to the audience had a powerful impact as my research was reflecting what I was presenting. Next was the Saint Nicholas Cathedral in Monte Carlo I presented the cathedral and explained its significance on Monaco’s independence day.  The clay model of Monaco’s famous dish Barbajuan was difficult as to present it I had to shape it properly and fill it with green and white clay which represents spinach and Ricotta cheese and had to paint it so it looked similar but the paint was not covering the clay I had to put more on it till it looked like a deep fried evening snack.

I think that with strengths everyone has their own weakness which has to be converted into strength for reflecting your full potential in that particular CAS activity. Somethings that I found to be improved upon is the pronunciation of certain words. My country was Monaco and some words which were to be pronounced in French I got messed up. The word was Grand Prix F1 race two French teachers corrected me and then I was presenting my F1 race poster effectively. Before setting up the models and arranging it for the visitors to see our craft I could have helped my colleagues in a better. I did help them but I could have done more so that the hard work for culture day paid off. But still, the culture day and our European continent was a success.

LO1. Identify own strengths and develop areas for growth

I Identified my strength that was that my hands are good on creative tasks like making models and some chart papers to showcase the information related to my country Monaco and as well as other informative readings. My weakness was that I needed to collaborate work with my teammates and also help each other to make each one’s project look immaculate.

LO2. Demonstrate that challenges have been undertaken, developing new skills in the process.

The obstacle that was to be undertaken was the 3D model which was difficult as I had to make quadrants according to the information that I was going to provide. So I made four quadrants for its culinary delights, traditional clothes, traditions and cultures and information and history of Monaco. It is important that challenges should be faced as the next time a person does an activity he or she has their intellectual trained and faces it and achieves the challenge. I did learn how to research effectively while extracting resources by your own and implementing them in your projects.

LO3. Demonstrate how to initiate and plan a CAS experience.

In this particular CAS experience, I was organized and completed the projects that I will display on the final day with achieving all the deadlines given by our team leaders. At some projects, I am organized but some different tasks I lack to complete it and that in an unorganized way but manage to complete it before the deadline. For me, Initiating is always difficult as after planning also somethings don’t work which have to be repeated again. Planning and initiating might be easier in future as you learn from your past mistakes some things will remain unorganized but other than that your initiating will run smoothly. If you know how to plan and make things work you will have a clear picture of how your final product/service will look.

LO4. Show commitment to and perseverance in CAS experiences.

Two times In a week the European continent had meetings with the heads and there we discussed what execution is still left and what has been completed you can rather call it a weekly update on your performance and collaboration in the project. We had to come early to school for completing our tasks and had to make the project in our free slots to make the maximum utilization of our time. In this CAS experience, it was quite easy to commit and be persistent because all the things were going according to the plan so we completed our task on time and were ready for it. It is not a piece of cake for me to commit things and be persistent in it as sometimes I procrastinate my work and don’t want to complete the task at that time but when I come to know that I have piled up my task I immediately start doing it and submit it on time. Gradually the commitment and persistence come and which are very important.

LO5. Demonstrate the skills and recognize the benefits of working collaboratively.

Working with others is sometimes difficult because at times your perception and the opposite person’s thinking clash leading to an argument. People don’t want to work with others they are reserved so do not accept what others are saying.But in culture day working with others was actually fun as we all were collaborating and helping each other so that our teamwork reflects what we have presented in front of everyone. It is important to work collaboratively as it teaches you what to adapt from the positive qualities of the person you are working with. Teamwork means sharing responsibilities equally so that everyone learns to take over a task done by another person. In our culture day, the importance was that teamwork realized us how much potential each one of us is having and what can we develop more in ourselves so that our intelligence is working in a very efficient way.

The learner profile attributes we gained in this CAS experience are –

We have learned many things in this CAS experience and the hard work we committed in our experience paid off by every one of us and also learned the skills we didn’t recognize we had in us.

Some evidence in form of pictures – 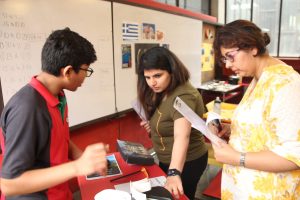 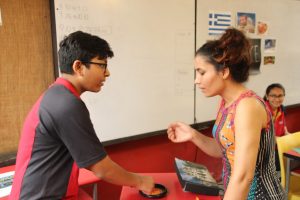 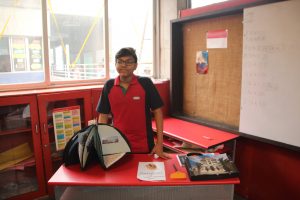