Throughout my life, I have participated in many football tournaments like the FS cup, Khel Mahakumbh, inter-house tournaments etc. Sports was also a key part of my life and football was probably the first sport that got me started in sports. My former PS selection was also football and I full-heartedly enjoy the sport. Despite choosing to leave football as a PS choice, I got another opportunity to play for my team in FS open 2018. I was also awarded to take a penalty and I scored it.

Through this CAS experience, I covered the activity stand of CAS and covered L1 and L2 and L5

L1)  Identify own strengths and develop areas for growth

I play as a midfielder for my team because of the fact that my core strengths are passing the ball precisely and shoot accurately in the goal. I previously played as a defender but I started to realize my passing and shoot abilities weren’t tested and used and also I lacked physicality it needs to be a tough defense. With that in mind, I chose to overlook my weaknesses and focus on my strengths. One thing I noticed as a major scope of improvement was my speed so, during practices, I used to do speed training for a good amount of time and then practice taking shots which were my core strengths. Overcoming the problem of speed and refining my shooting really helped me perform better during the tournament

L2) Demonstrate that challenges have been undertaken developing new skills,

The major problem I faced while developing new skills was the lack of time. My basketball and football tournaments were on the same day, also our PS slots are only once or twice a week and as I am a crucial member of the basketball team I had to keep basketball above in my priority list. But that does not mean I would not give time to football practice. This time constraint was a major problem in developing and refining skills in football.

L4) commitment to and perseverance

Despite having 2 tournaments at the same time, I gave enough time to both the sports. I used to practice basketball in school during my PS slots and then I used to practice football during my free slots. That way, I was able to give time to both the sports. I didn’t let anything affect my practice, even in hard sunlight, I worked equally hard. I realized commitment is the key to success.

On the day of the tournament, I used to switch between the sports without any breaks. I used to finish my basketball game and right after I used to go for the football match.

During the match, at half-time, we were 2 goals down. Despite that, we didn’t lose hope and kept working hard. In the last 10 mins of the game, we scored 2 goals to tie the game. The entire team was committed to win the game and we came back from 2 goals down.

As football is a team sport, we knew working collaboratively is the only thing that would win games for us. We were always taught by our coaches to pass the ball as much as possible and develop cooperation with team members. Hence, our team was very cooperative. The comeback we did was the result of combined efforts of all team and no one person gets the credit for it. The special thing about our team was that unselfishness was our first priority and hence we were able to perform that way. 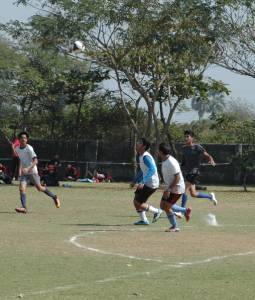 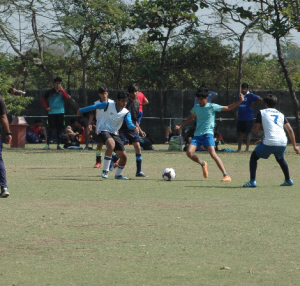