On the first day of our new academic year, we were taken to a beach nearby our school, as they thought that it would help us as shifting directly from a vacation to studies and academics is very hard, also in doing so it would also bring a change to the society. Our main aim was to go there and collect all and garbage thrown on the beach. We were divided into groups, which helped us in staying focused on what the main aim is as we were not with our friends. We tried our best to get as much as possible. we also experienced being in the shoes of the garbage cleaners and how they feel when they have to do this for the entire day and base their living on this.

The learning outcomes that I fulfilled are:

LO 2: Demonstrate that challenges have been undertaken, developing new skills in the process:

When we were first told that we were supposed to pick up the garbage and throw it in garbage bags, I thought that it would be a very easy work as Surat being a not so big city, no one would go to beaches hence less garbage. When I first saw the beach it changed my perspective of beaches in Surat as there was not a single place where we could not find garbage. Picking up garbage is not something that we do on a daily basis. My reaction on picking up the garbage was not very open-minded. This was because of the different mind sets we were brought up in as we had not done this type of work before. We were soon okay and we overcame a challenge that we faced initially. We enhanced our teamwork skills as that was one of the ways we were able to complete it quickly. We worked together in a team and picked up as much garbage as possible. Given some time we also became good thinkers as witnessing this type garbage disposal, it made us think where we stand as a city.

LO 5: Demonstrate the skills and recognize the benefits of working collaboratively:

For this activity, we had to work in groups. We were all divided into groups of 5 and were segregated to certain areas. Each group had to fill the trash in a big trash-bag. People did not accept each other’s decisions which caused a few conflicts. For example, no one wanted to hold the bag where the garbage was thrown in, so we decided to come over a conclusion as a group which was, holding the garbage bag turn by turn for 10 minutes.  This made the whole process much smoother and easier and we did a lot of more productive work. We were able to successfully complete this activity quickly once we started coordinating nicely.

The main issue was clearly visible, which was pollution. This activity was related to a social cause. It helped the society what we did. This issue has been a global issue for over few decades and it has been increasing day by day. There have been many cases of animal choking on different kind of plastics and that is thrown around ecosystems like such. People are throwing garbage everywhere especially here in India people don’t ever care a little, this is because people don’t know the consequences of their actions. Despite all the posters and other advertising campaigns that are set up for anti-pollution, people are still throwing garbage on the streets from moving cars because people are very busy in their own personal life, we often forget our duties as a nation.

LO 7: Recognize and consider the ethics of choices and actions:

We were given a break in between, we were given few snacks and treats. When we were done eating and chatting with our friends we realized the mess that we made and it seemed to me very ironical as we went there to pickup the garbage and influence other people doing so, instead we ended up throwing garbage and making a mess ourselves. Feeling ashamed we picked up our mess and then at this moment I realized the main cause of this problem which was carelessness. As a group, now we made sure we were doing it enthusiastically and that we were not leaving a false impression on the people around. We had to make sure what we were doing was ethical by making the right decisions and putting ourselves into the shoes of the cleaners who do this on a daily basis. Only if we were able to get ourselves in that perspective, we could have executed this activity with enthusiasm and created an impact on others.

When we were done with picking up garbage we played some games like kho-kho, kabaddi, leg-football, tug of war, etc. This activities were meant to quickly charge up our body from the long break. 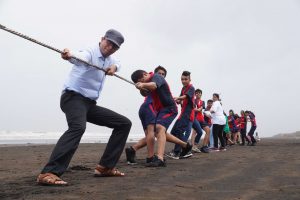 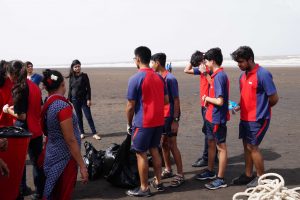 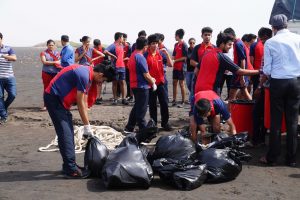