Every year there is an Inter School taekwondo championship organized in our school. This year I and two of my friends were given the responsibility to organize this event. In this event we had to take care of everything needed, including writing certificates, giving requirements of things needed on the day of the event, laying out the mats according to the measurements and take care of registrations. We were also expected to handle all the matches with the help of some volunteers and also were asked to deal with all the problems that occurred on the day of the event.

The learning outcomes that have been covered in this activity are:

L1: Identify own strengths and develop areas of growth.

Organising events has always been my interest. I really love doing this. I was not that good at it in the starting but now I think I can do it. Assigning jobs, handling lazy people and managing all the stuff in an event is what I think I can do well. This had helped me sign up for this event as an organizer. It would give me an opportunity to show my skills and learn new ones. One weakness that I recognized during this championship is that I have less patience, which is a really important quality needed as an organizer, I did work on it and am planning to work on them more, to be better at it. While I was writing the certificates I realized my handwriting was better on certificates and I could write faster than others which helped us in doing our work as soon as possible and we could go to the other step planning.

L2: Demonstrate that challenges have been undertaken, developing new skills in the process

One of the most difficult challenges was to finish the writing of 450 certificates in the interval of a week and additionally lookout of the registrations that were continuously altering as there were several age classes and beneath the age classes, there have been added several weight classes that created all the certificates to show a discrepancy. It undoubtedly was difficult because the handwriting of me and my colleagues was slower than needed (mine were faster but still slower than required!) and we had shortage of time to finish them and also arrange them according to their schools.10 schools had participated and it was troublesome to segregate the certificates. We tend to overcome this challenge by attempting to depart studies aside and so operating upon this within the free periods we use to get and additionally by taking aid from our friends who weren’t involved in the organizing of this event, however, were simply free so helped us complete this. One new ability I learned was to build folks work and additionally after they won’t have any returns as a result not everybody in this world works at no cost, on the other hand, I attempted to control them and convinced them to help us, they finally did. there was a time when I use to think that this kind of work was not my cup of tea however currently I have learned the way to build folks work on behalf of me and acquire my work completed with success.

L4: Show commitment to and perseverance in CAS experiences

Perseverance or commitment is highly required in this activity as this is a long-term activity it involves a lot of work that has to be done. Also, commitment is important because we were supposed to take care of writing all the 450 certificates that were to be given to the students who took part in the championship. Only the 3 of us had to write those certificates and complete the work. We required commitment because all this work had to be completed before the day of the competition. Also writing all the certificates was tiring and difficult as we had very less free slots during that time and also our school has really long working hours so I even did not have time once I was home. Even though it included so much I find it easy to be committed to things because I want to complete things perfectly once I take the responsibility

L7 : Recognize and consider the ethics of choices and actions

Many ethical issues were included like as it was competition there were chances that cheating could take place as it was humanly possible for us to be both organizing the event and keeping a check if cheating was taking place so we decided to coordinate with the game referees that there should be no cheating and all the games should be played fairly and so should their results be. This ethical issue as such didn’t affect me but it was about the integrity of the event that had to be taken care of thus making a point that no ethics are harmed as they would then degrade the reputation of the competition for the future. Seeing that no cheating took place made me feel good as it was fair to both us as the organizers and to the people who took part in the competition. Another ethical issue was respecting everyone even if they are juniors as we have to work with them in the event. We had to make sure that even if those juniors are our friends besides the event we don’t shout at them or vent out our frustrations on these volunteers just because we were the organizers. Respecting everyone and no cheating have always been on my list and I always try to do my best in following these as it makes everything fair and peaceful. There is no change in opinion and I will always try to avoid cheating as much as possible to be equal towards everyone.

Organizing the event was an amazing experience with my colleagues and also working towards this event made me learned a lot of new things which I hope I can use in my future for my betterment. 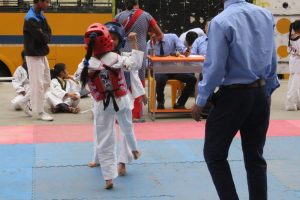 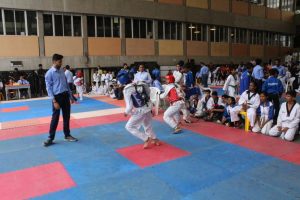