MUN stands for Model United Nations. It is a conference where students take part in different committees and represent different countries with each committee having a Real world problem to solve. This conference is help by Fountainhead each year with the name FSMUN. I have been an active member in FSMUN since the time it is established as a participant which is why this time I was a part of the finance department. I applied to be a part of finance team because I have math and business management as two of my higher level subjects and I wanted to apply the things I learned in these two subjects.

Following are the Learning outcomes I achieved:

L1.Identify own strengths and develop areas for growth: Since I already mentioned that I study math and business management and that Im good at these subjects. During the task I figured out that along with being good at finance Im also very interested in it because I like to take charge of it.Putting my skills and knowledge into the task of budgeting made me realise that logical and realistic thinking are one of my strengths and that I actually plan according to what is realistic. One of the evidences for the same was that the budget played out by me and my team Was  very accurate.although one of the challenge was finding accurate prices of the list of required things and also working with strangers.

L2. Demonstrate that challenges have been undertaken, developing new skills-during the task I definitely  developed the convincing skills since I worked in a group along with a few people whom I personally didn’t know and there were times when we had an argument regarding the budgeting of a few things and at those times I was successful at getting everyone to finalise the budget I planned by giving them logical reasons for the same.Due to group being new to all of us there were a lot of communication problems within group and also with the organisers of the MUN thats when I took up the leadership role and made WhatsApp group so that everyone is easily able to communicate and the work gets done smoothly.

L4. Show perseverance and commitment in CAS experience- There were communication problems in the group to resolve which I made a WhatsApp group which shows how committed I was to make a very precise budget so that actually helps the organiser and the overall committee of FSMUN. I also attended all the finance department meetings.

L5. Demonstrate skills and benefits of working collaboratively- I was in a team which had only one person whom I knew personally and all the other people were my seniors. It was difficult to communicate at start but then making groups and scheduling meeting made the task possible and easy. working cordially was very important for the team as we needed fruitful discussions to take place to come to conclusions since there was a huge list of requirements.

L7. Recognize and consider the ethics of choices and actions- In the task we were dealing with money which was a huge responsibility for all of us. We had to keep an account of all the transactions made and wherever even a single penny was spent.The budget was also going to be used to show to sponsors so we were advised to make a huge budget plan so that the organisers get more profit but I didn’t find that ethical and convinced them that it wasn’t a good idea to show false budget plan and that only the correct amount will be written in the plan.Also with money being in the picture we had a chance of misusing it but we didn’t misuse the money at all and thats where ethical considerations come into the picture. 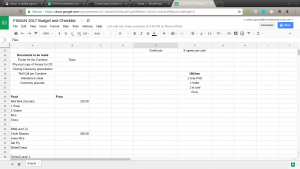 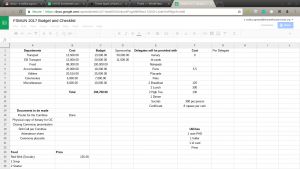