The recent life class that had been conducted in our school on 16 September talked about bullying. A practice by few people that had not even left me with making me a victim of it.  An issue  that had affected me to an extent of me going into depression. Bullying a practice that sounds fun to follow but what we don’t know is how much it hurts the victim who goes through this. So this time Vagisha Ma’am had asked grade 11 students to take an initiative and plan things that we could do to promote anti bullying in our school and all our work will be made a part of the plan of the life class. So then we the people who had taken the initiative started planning and came up with two ideas :

LO3 : Being a part of this project from the initial stage we were able to contribute to the different ideas that were flowing in everyone’s minds. We had to plan about how things will flow upon and how we are going to manage all the things required in this process. We also were able to collaborate with Pankti Ma’am and take ideas on this project so that our work would look more creative and could easily done. We had a done a lot of planning upon when we are going to meet and what we were going to do in those meetings. There were times when not all members were present so we had to do extra meetings but once the work was divided we decided that whoever doesn’t come for the meeting will have to use their free slot for this and complete their part of the task.  In this way we had successfully implemented our plan and our project were ready even though we had time constraints.

LO4 : Due to some reasons most of the members in the group including me lacked commitment and above all this time was huge constraint as we had only one month to plan and implement things out of which not all of us had same free slots and it was very difficult for everyone to come early to school everyday and even if came early we had different subjects that were to be catered but once we were given a consequence of not coming to school by missing we had started coming early as we had other things to do then and also we then completed our task on time. By using this strategy we overcame the problem of commitment.

LO5 : One of the benefits of working as a team was that we were able to cater to different ideas which could have been difficult for only one person to find. Also as this task required creativity, different perspectives help us come up with better ideas and easy ideas that can be feasible to do in a very less time though working collaboratively also had its repercussions because we all were not coming on the same day to do the work we didn’t know where the work was leading though we tried to solve this problem by deciding about the meeting a day or two before the meeting so that we can work collaboratively and together so that all of us are on the same page and know where the work is leading to.

LO6 : As I mentioned in the start even I am a victim of bullying, I realized bullying is a thing most of the teenagers and young adults go through in different forms and in different phases of their lives.  People not only in my school but all over the world are trying to create its awareness and inform people about it’s consequences. Thus is project that had a lot of things that we can relate to on the global scale. We also decided to do this campaign it would just make the bullies realize their mistakes and it is a not violent or hurting way to portray our thoughts and idea.

All over in this project we learnt creativity, time management and team building skills. 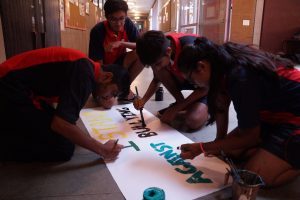