Recently, 4 people from our batch were selected to be a part of the Cyber congress team lead by none other then Rakshit Tandon himself. He by profession is “Online Safety, Director Council of Information Security, Consultant- Internet & Mobile Association of India”.

We under him had several sessions and workshops where he made us understand different types of cyber hacks and in what ways are people misusing their online rights. He also showed us different ways to tackle such problems and have to report serious online threats/bullies to the higher authority. Later we as students, conducted over 3-4 sessions across the year where we made our friends understand online safety through PPT’s and live demonstrations.

Today Cyberbullying is a serious crime which on a global level has affected millions of lives. Online frauds, bullying, death threats are all only a small part of it. We as social media users have a responsibility to not only to post something which is non-offensive but also blocks others and reports issues if someone else is misusing the advantage of social media.

We based our workshops and teaching on a similar topic. Where we used examples of different social media apps and showed them some harmful content which can hurt someone’s/group’s sentiments. Later we also made them understand the bifurcation between using social media and misusing it. Lastly, measures to curtail such posts were also shown. We gave them our school id’s and also a platform where they could openly share their opinions and problems.  By taking such small steps we made a group named Cyber congress which was lead by us students and our head was Rakshit Tandon.

Today, by making a cyber congress in Fountainhead school we as students have acted locally, and that’s how we want to proceed further. We are getting more known amongst the school fraternity and its good to see that students now are reporting issues and online problems to us.

LO 7: Recognize and consider the ethics of choices and actions:

For this task, LO 7 was the most important and the base of our workshop. We were chosen amongst 58 students and that itself was a big responsibility for us. Secondly, we had to report directly to Rakshit Tandon as Fountainhead students so it all added to our responsibilities.

Ethics and values were the core to develop a relationship between the students and the Cyber congress team. When this group was established hardly any reports were reported because students still did not have trust in us and they felt we would leak the information to their friends. But soon after conduction so many sessions and taking a pledge in front of the whole MY-DP batch, they soon gained trust in us.

Even today Cyber Congress is a success because our actions were ethical and were kept between the team. We first made sure that none of us leaks any information outside the group. Secondly, within 2-3 days we used to reply back to the student by solving their problems and making the bully realize what he/she did was wrong.

Being students of IB managing time has always been difficult for us. With long school hours, and a lengthy syllabus to complete spending several working days on making PPT’s and conducting workshops was surely a bit hectic. But we somehow managed to come early on many days and completed our work before the deadline arrived. One of my friend (Divij) and I also met at my house to make the PPT and additionally provide students with a brochure which contained several ways to report issues/problem.

Secondly, a commitment was needed not only in putting extra efforts but also in making sure that information/topics/issues which are discussed within the group are never leaked outside and not to be told to someone very near to us too.

Overall, it was a worth learning session and out of 10 years spent at Fountainhead school, I will always remember being a part of Cyber Congress team which put smiles on many students and taught lessons to those who misused their online power. 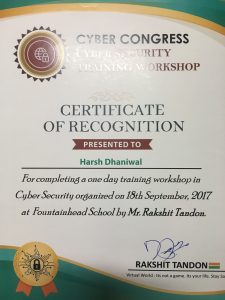