I have always been interested in doing business or exploring fields related to this field. So, I along with the other 4 friends of mine decided that we would organize an event in our city so that we know more about the business that is involved in the organizing sector. Also, we wanted to deal with the real market to know more about the functioning of different markets and understand which market is profitable and how it is that way. We decided to call up a group of stand up comics named The Comedy Factory. We used all the business functions to do the project. We started with the aim to do charity but were unable to gain high profits which led us being unable to do charity and include the service component in our project.

LO1: Identify own strengths and develop areas for growth

One of the strengths that I had discovered while doing the project is that I had the quality to be a negotiator between my group members whenever they had a disagreement amongst themselves. Though I  was not a leader in this project, another teammate was the leader still there were times when I had to intervene between the arguments to settle them and then come to a conclusion. Being aware of this quality makes me feel that I am heading towards becoming a good leader as negotiating is one of the qualities that is required by a leader and also in order to have a successful event. I think being aware of such qualities in our personality helps us to enhance them for the future when we come across similar situations we can use them to be successful in those situations too. I realized that I have a weakness while I was working on this project. The weakness that I had discovered was I lacked marketing skills and it was difficult for me to pitch in for sponsors. Now that I know about this weakness I think it will help me in the future where I could take other people’s help to pitch in for sponsors to get a better a deal from then. I will also work on this weakness as it will beneficial for me in the in order to be independent.

LO2: Demonstrate that challenges have been undertaken, developing new skills in the process

A challenge that was undertaken during this task was that to communicate effectively amongst the group members and also marketing our project as much as a problem. Another challenge was to have everyone on the same page to avoid disagreements. All these tasks were challenging for us some things were new for us and other things like communication were difficult as it was vacation period so all the members were also traveling while working on this project so due to time zone difference communication gap was created. I have not done something similar in the past as organizing such an event was very new for me and belonged to a very different field than in which I generally work in. Overcoming these challenges was difficult because everyone had different working speeds causing them all to be on different points in the project so to overcome this problem of people being unaware about things a certain times we used to communicate using social media and try to keep people informed about things as much as possible in order to avoid the communication gap. I think while we overcome such challenges the bonds with the colleagues gets stronger and also while overcoming such challenges we learn a lot of new skills too.

LO3: Demonstrate how to initiate and plan a CAS experience

Usually, I am an organized person so being organized for me in this task was relatively fine as I was able to complete all the tasks on time as it was planned by the time. For organizing myself I had set my own internal deadlines relating to selling the tickets and pitching in sponsors as these were the most required things in the whole project. Planning for the project was relatively easy but initializing the task was difficult as we were 5 people so it was necessary for all the members to meet their deadlines. While planning and initializing there were many skills that my team mated had discovered for them self but for me, I couldn’t learn any new skill explicitly. For the future, though I will keep in mind that when I put deadlines I have such deadlines which can be achieved by all the members and not just one of the members. Planning and then initiating a activity is necessary because it helps us to be organized while we take upon the project and then it also helps us avoid end moment chaos.

LO4: Show commitment to and perseverance in CAS experiences

As this was a project that took more than 6 months it required a lot of commitment from all our sides. So we had to be motivated in order to get the project complete successfully and make our show a huge success. For me, it is generally easy to commit to things like this and thus it was simpler for me to commit to this project. I also understand the importance of being committed as it helps us to be motivated to work towards the task and also it helps us to focus on our goals related to the task.

When it comes to working with others the easiness about working with people depends upon who I am working with. If I am working with someone close it is comparatively easier for me to work with them as compared to working with acquaintances or just classmates because many times I find myself uncomfortable in working with them though there is no problem in working with them. For this particular project as it was the CAS project I chose to work on this with my close friends because I thought that it would be easier to work with them, as the communication is better and also we can understand each other and are aware of each other’s strength and weakness so it is easier to work with each other. Though I thought it would have been easy for me to work with them, things were different as there were times it was difficult to work with many members as always due to some or other problems most members were not on the page. Making this difficult for me to work with these people. Even though many times I feel working alone is better I feel working with others is mostly an advantage for us as we get a helping hand in our tasks who help complete tasks. Also while decision making if we have the collaboration of other people we can consider several different perspectives which leads to us thinking differently and that could also lead to a better decision and evaluated decisions. In this activity teamwork was one of the most important things as we had a lot of different things to be done and thus we had divided our work amongst the five of us. Even though the work was divided into each and every task was interrelated and thus we had to have teamwork in order to make this event a success and sell tickets as many as possible. Leadership in this activity was required in order to keep a track of the work done by all members and also to make sure that we, all the members, meet our deadlines with effective work being done.

Working on this event as a whole was an amazing experience as being a business student I wanted to work in the real market and understand its functioning. Doing such a project helped me learn a lot about the real market and explore it. All another agenda of this project was to do charity with all the profits earnt but due to some problems, all the revenue that we had gained got used up to cover up the costs that were included in organizing this event. On whole such a project was a once in a lifetime experience and from this project, I could use my theoretical knowledge in the real world. 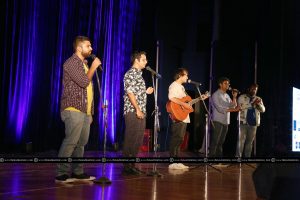 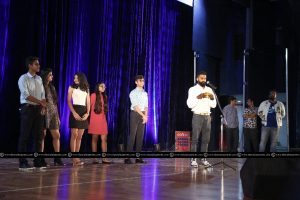 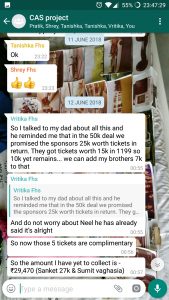 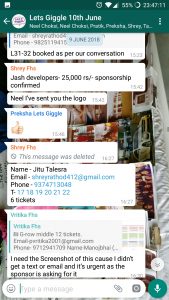 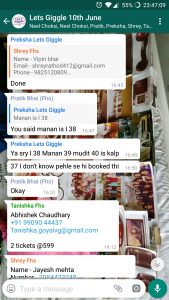 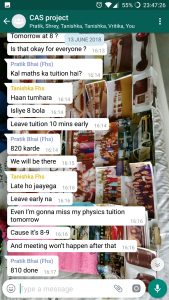 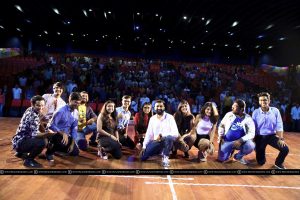 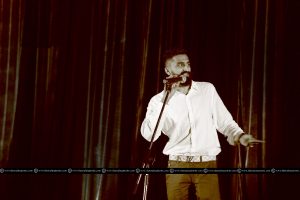